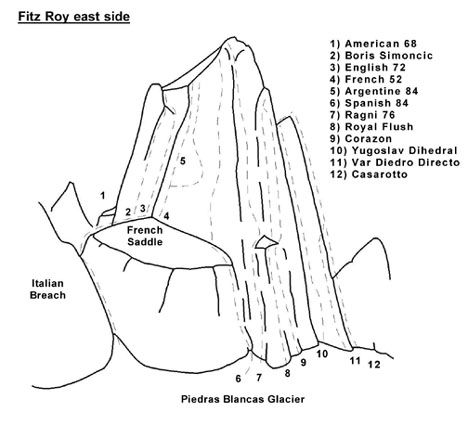 Introduction to Fitz Roy
Mount Fitz Roy is the highest peak of the region, at the Eastern side of the Southern Patagonian Ice Field, and is included in “Los Glaciares National Park”, on the Argentine Patagonia, accessible in practice only by that country.
It is the most striking summit of a huge group of impressive and challenging peaks and summits, that in no way envy the Torres del Paine of Chilean Patagonia, but which possesses certain characteristics of its own which make it very interesting. Possibly this mountain, along with many others of the zone, are and will continue being the dream, the maximum destiny of "the conquerors of the useless".
The "Fitz" is part of a granite massif, which includes a mountain range of several smaller needles -satellites of it-, which is somewhat further away from the Patagonian Ice than its neighboring Cerro Torre, for example, allowing, in some way, better weather conditions.
The Fitz Roy owes its name to Robert Fitz Roy, captain of the Beagle, the famous vessel that carried Darwin on his way through South America. This is not what the Tehuelches called it from the immemorial times “El Chaltén” - which in tehuelche language means "steaming mountain" - undergoes this change to the being renamed by the Argentine expert of the Commission of Boundaries Francisco Moreno. Currently the original name, Chaltén, is being reused. However, it is Fitz Roy as you have been engraved in the hearts of countless climbers who have dreamed it. 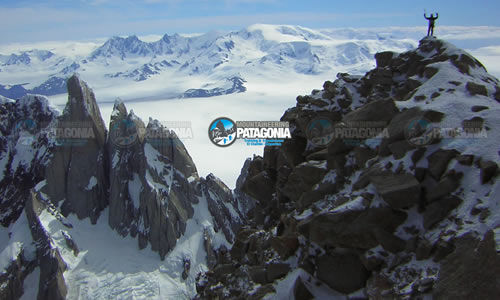 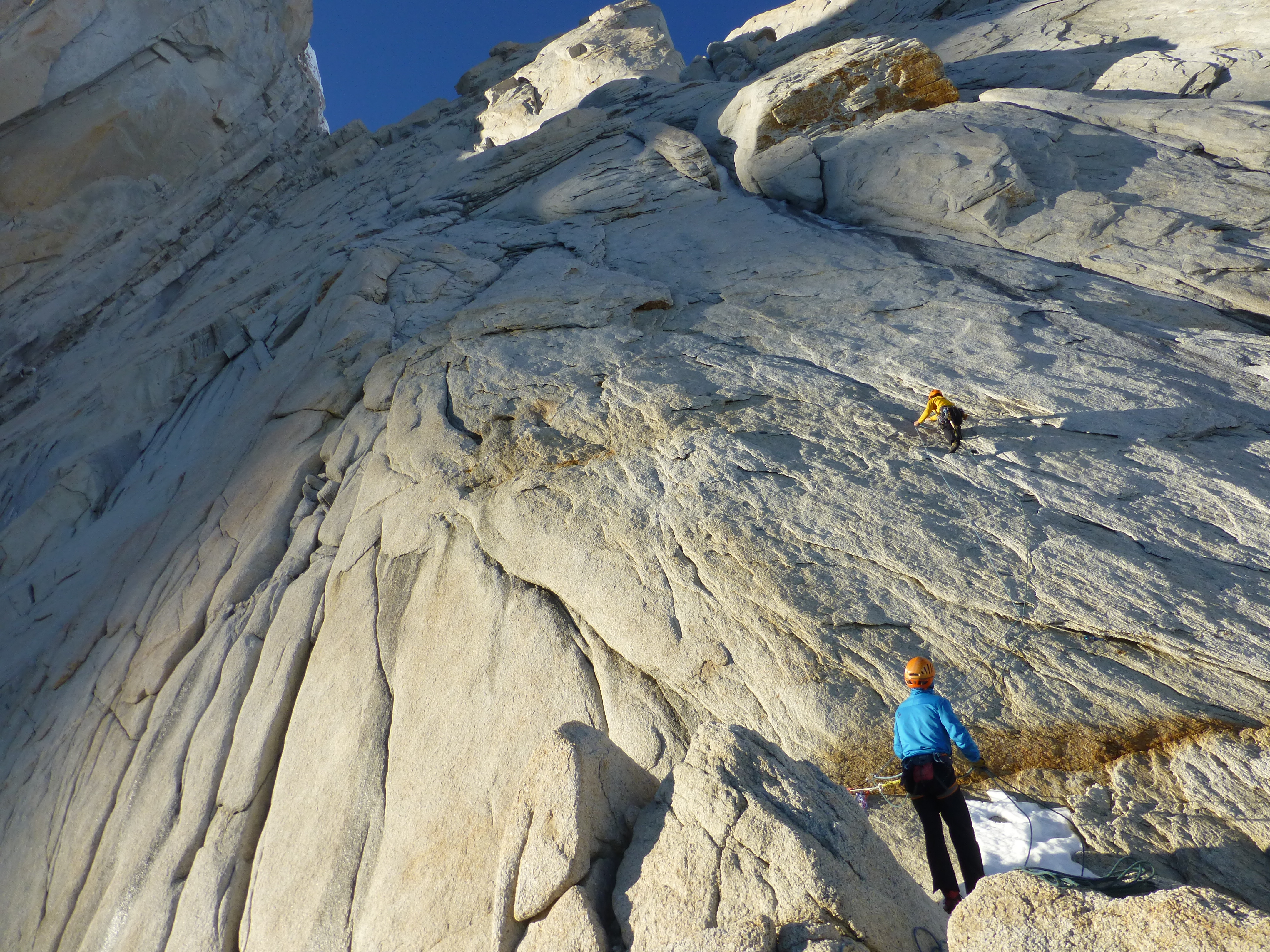 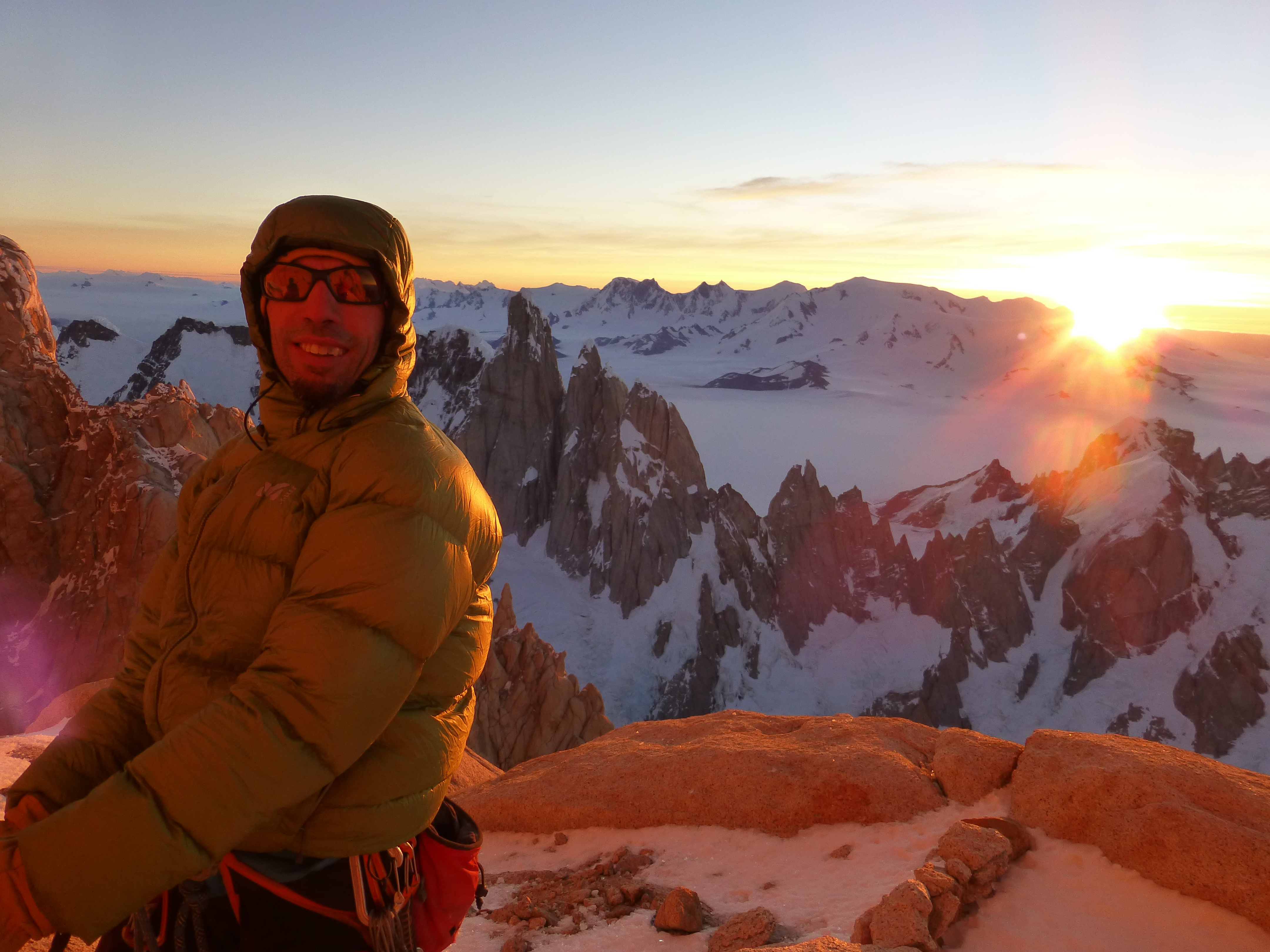 My Experience on Fitz Roy

My first ascent to Fitz Roy was in 2004, after 9 years of my first visit to El Chaltén. In the summer 94-95, I did my first Expedition with 3 friends from Bariloche; in this opportunity we were able to climb “Aguja Guillaumet”, “Aguja de la S”, and “Poincenot”. We also did our first attempt to Fitz Roy, but we´ve got only to the 4th pith of the “Franco-Argentina” route. The following year, I did another attempt to Fitz Roy by the “Californian” route, but we had to turn around again...

Afterword’s, I was very busy working as a guide the following summers, until 2004 when my 2 friends Walter and Jeremías invited me to go with them to Fitz Roy: We´re going up to Paso Superior tomorrow, you want to come with us? No doubt I said yes! Get my pack ready and the following day we went to “Paso Superior”, were we did a bivouac with the idea to start at 1am to the “ Brecha de los Italianos”. At night it was overcast with some wind and snowflakes, so we stay in our sleeping bags...We awake at 9am with the sky clear and sunny! What do we do? Let´s start now anyways and we´ll do a bivouac on the Wall. So we climbed to the 5th pitch (base of the dihedral), were we fixed next pitch and spend the night in a very small ledge.

When we were going to use our stove to melt snow and make some soup, we realized that the fuel canister was not compatible with our stove! No other option than some chocolate and cold water for dinner...It was a cold and long night, but at sunrise we´re ready to keep going up with nice weather!

We´ve got to the Summit in the afternoon and an incredible view; I remember when I got to the end of difficulties, 30 min below the Summit, an indescribable emotion! Some Photos and hugs in the top of Fitz Roy and we started our way down to Paso Superior and to celebrate at El Chaltén with a big barbecue! 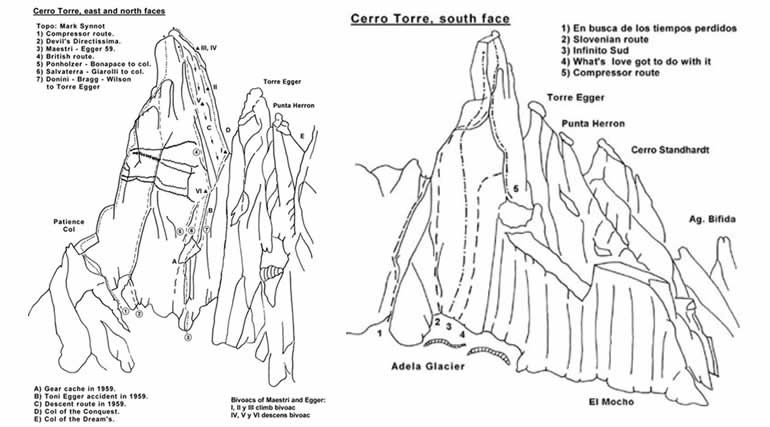 Introduction to Cerro Torre
The Cerro Torre is located in the National Park Los Glaciares, Argentine Patagonia. Is part of a mountain range with four main peaks; Cerro Torre, Torre Egger, Punta Herron, and Cerro Standhart. It is the highest of these four mountains. The Cerro Torre rises in Argentine territory on the eastern edge of the Southern Ice Field, 50 miles north of Torres del Paine National Park in Chile. Cerro Torre is one of the worlds most desired peaks to climb due to its difficulty.
The Cerro Torre is famous not for its height, but for the bad weather, for its steeps iced faces and difficult climbing techniques. Due to the proximity to the Ice Field and the Pacific storms, the micro clime involves a lot of precipitations and a powerful winds making it fearsome. Even the toughest climbers have to take a look inside before attempting an ascent in the conditions that Cerro Torre presents.
Climbing usually takes three to five days but has been done in a day and a half. The weather at Cerro Torre is very bad, being the South exposure the worst weather. Often the top of Cerro Torre is covered by a frost crown of ice known as the “Ice Mushrooms”, and some times can take several hours to climb this last section, due to the difficulty of climbing on inconsistent and often over hanging Ice walls. 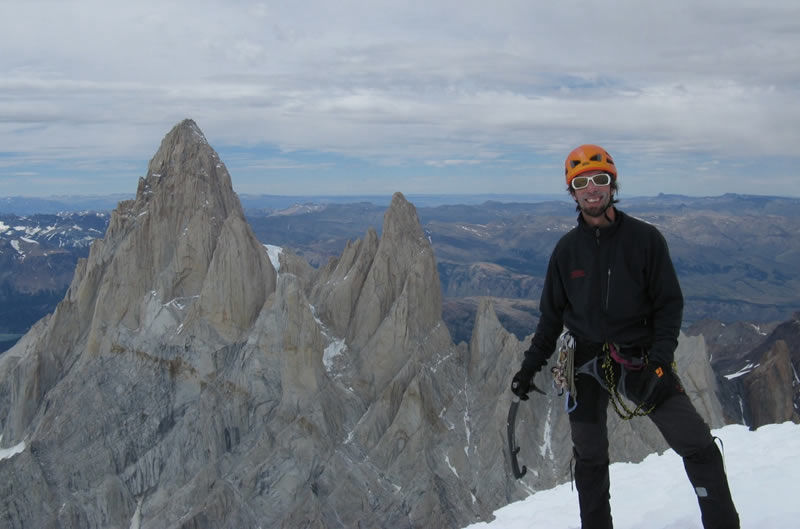 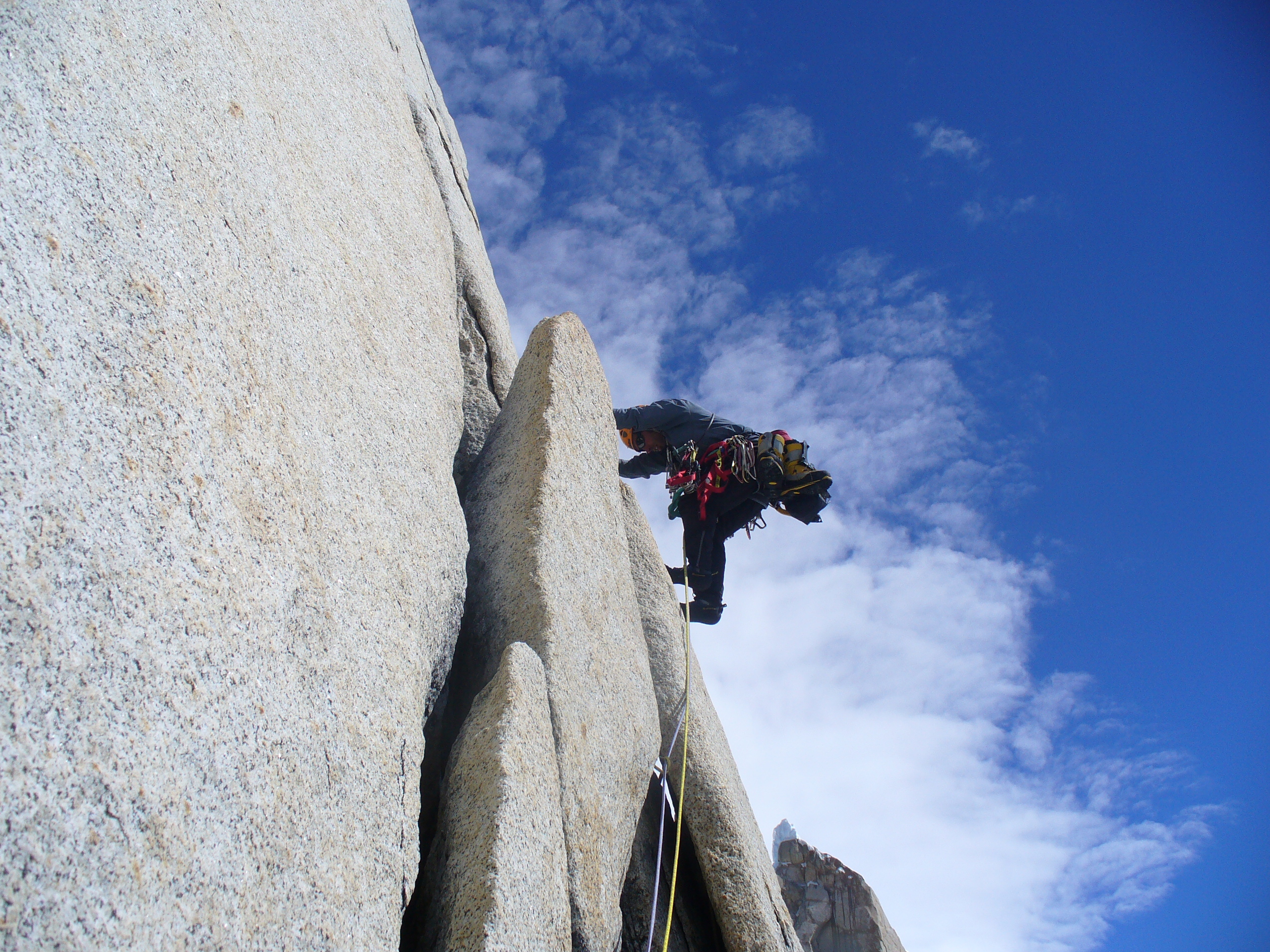 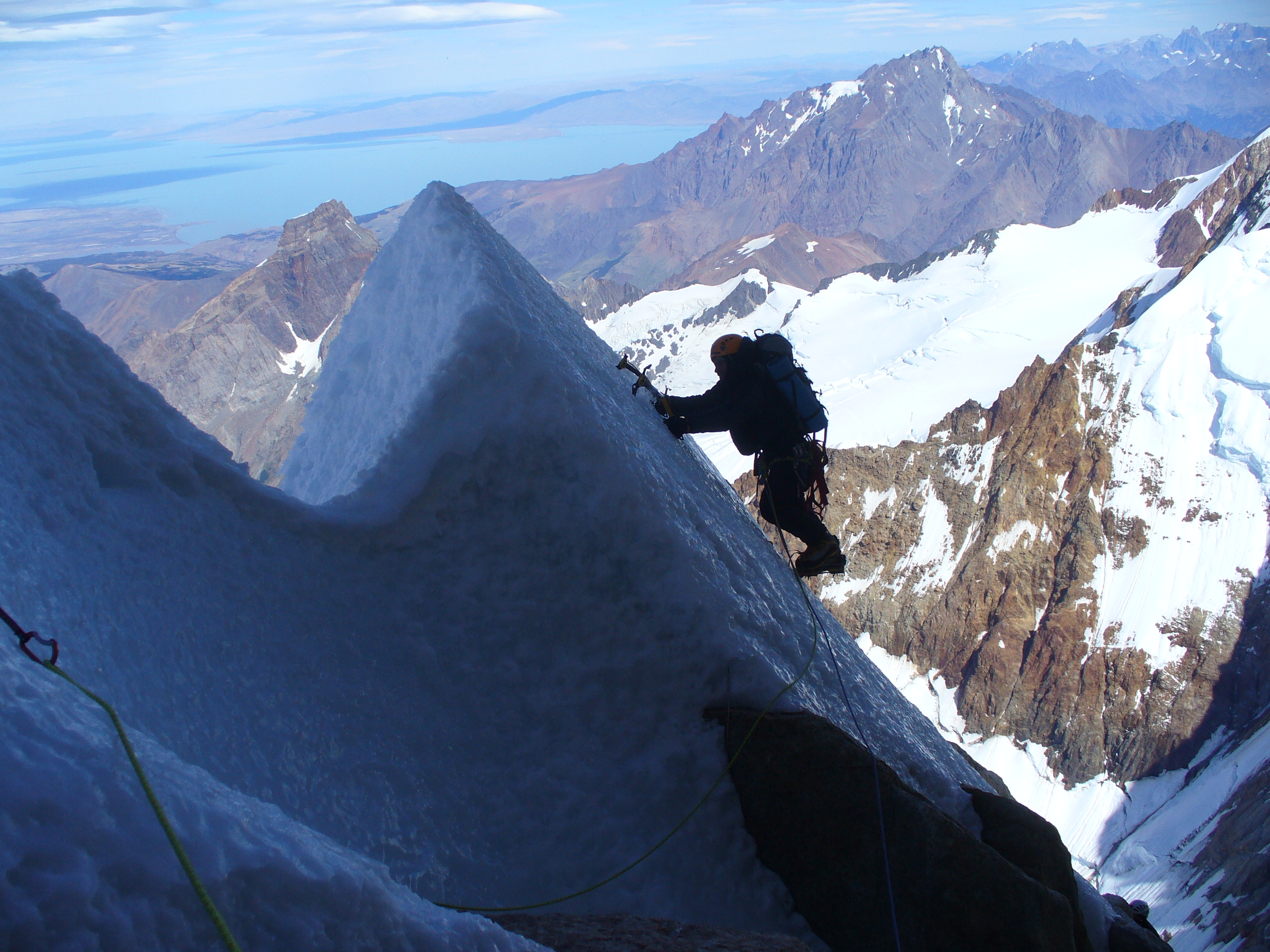 My Experience on Cerro Torre

Along the winter and spring, there is enough time to imagine the next projects for the summer... That´s how we decided to try Cerro Torre by the compressor route with my friends Max and Manu in 2007.

In our first attempt, we could only get to the “Shoulder” of the Torre. There is were the technical climb begin. To reach the shoulder you need to traverse the Torre Glacier and then ascend a mixed ramp of 300m. Once in the shoulder we dig a snow cave and we fixed the first two pitches of the route in order to start faster the following day...The next morning, the weather was stormy! So well, get up to get the ropes and descend to El Chaltén.

At the end of November, we saw another chance with the weather forecast to try it again, this time we reach the pitch 15 of the route, half way up, but we had to bivouac in a small ledge on a stormy night! Again, we turned around next morning...

After we all started to work, and then in February 2008, we saw a long “window” of good weather coming with Max. Manu couldn´t come this time, because he had to guide a group, so we decide to try it with Max.

This time, we began climbing from “Norwegian”, bivouac, we passed the mixed ramp and reached the 10th pitch, were we decided to stop for a bivouac in a good ledge, and we´re not so sure of the incoming clouds...

The next morning, clear sky and we kept going up! The idea was to reach the top this day, but in the last pitch of the headwall, it was late at night and we had to descended 40 meters below to bivouac in a small ledge, together with a British party.

After the second bivouac in the Wall, sunrise was clear, and after a cappuccino with Max, we went up to the Summit, and we realized that the previous night we were very close to the end of the route. Once climbing the Summit mushroom, we felt a great emotion, a dream that become true...

At mid day we were in the top of Cerro Torre, and we shared this moment with our families by radio, they were waiting for our news at El Chaltén!

After 40 min. in the Summit, we began to descend and arrived to the shoulder at sunset. The following day back to El Chaltén to celebrate!

Patagonia Vertical
In El Chaltén Massif are some of the most dramatic mountains in the world, including Mount Fitz Roy and Cerro Torre. These spires and mountains offer both classic and extreme climbs. This guide describes each and every one of the routes in the area. Although this massif is no longer remote as it was, the beauty of the mountains, the quality of the rock and the fierce storms have not changed, and allow climbers to seek true adventures and unique experiences

Sport Climbing in El Chaltén
It brings together 140 sports climbing routes, with a very clear description of accesses and topos.
Author: Cesar Acuña
NOTE: There are many new routes, single and multi-pitch climbs not listed on the books yet!

American Alpine Journal
Summary: The first one-day ascent of the Torre Traverse (crossing Aguja Standhardt, Punta Herron, Torre Egger, and Cerro Torre), completed by Colin Haley and Alex Honnold in 20:40 (Standhardt Col to summit of Cerro Torre), January 31, 2016. The only previous ascent was made over four days in January 2008, by Haley and Rolando Garibotti. The first one-day ascent, all free by both climbers, of the Wave Effect (crossing Aguja Desmochada, Aguja de la Silla, and Fitz Roy), completed by Haley and Honnold in 17:07 (base of Desmochada to summit of Fitz Roy), February 6, 2016. The only previous ascent was made over three days in 2011.

Thanks for filling out the form!

About Us
Book your trip
General Information
Blog